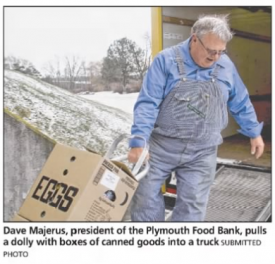 Kroll and three local volunteers visited Lakeland College last week to pick up 13,442 non-perishable food items for the Sheboygan County Food Bank. The cans and boxes of food, collected over the past month by Lakeland students, faculty, alumni and visitors to campus, will now be distributed to local families in need through 10 area food banks or pantries.

"We have 2,500 families in our county who regularly depend on us," said Kroll, adding that number is growing. "I think it's amazing how the Lakeland community rallied to help us. Our shelves are nearly empty, and this will help so much."

Lakeland's food drive is tied to the annual Northern Athletics Collegiate Conference's "Cans Across the Conference" initiative. Since 2006, Lakeland has participated in this event, and the number of items raised by the Muskies community has skyrocketed from year to year.

In the past four years alone, Lakeland's total of collected and donated items has risen each year, beginning with 1,225 in 2010.

"I'm just so excited about how much effort everyone in the Lakeland community put into this," said Lindsey Vande Hoef, Lakeland's women's basketball coach who spearheaded the drive. "To think about how many more people we will help, people right here in our own back year, is humbling."

This year's drive featured everything from door-to-door trick-or-treating for food by members of Lakeland's sports teams, to a first-time "Canstruction" event in the campus fieldhouse.

The Canstruction competition featured 14 teams comprised of athletes, student club members and Lakeland employees building creations made from collected cans and boxes of food. The event, organized by Lakeland's Student Life department, was sponsored and judged by Sheboygan's A. Chappa Construction, which also donated money to the cause.

First place went to the men's volleyball team, which built a mini-volleyball court - complete with bleachers.

More than 5,000 non-perishable items were raised through the Canstruction event alone.

The women's softball team collected more than 2,000 items and the men's volleyball team gathered more than 1,000.

On Monday, Dave Majerus, president of the Plymouth Food Bank, drove a truck he had borrowed from St. Vincent DePaul in Plymouth to Lakeland for the collection. It was a team effort to load the thousands of items, with Plymouth Food Bank Vice President Jerry Preder and Howards Grove's David Scharinger - Korll's brother-in-law - lending a hand.

"This is a very surprising amount," said a smiling Majerus as he wheeled a dolly of boxes filled with food up a ramp and into the truck. "This is a lot."

"It's nice that these young people are doing this," said Preder. "It's great to see."

Interested in becoming a sub-contractor? Connect with us to find out more information.